I was facilitating a class this week during which the students were trying to understand the drivers of business valuation.  Because the class was made up entirely of business owners, they were naturally keen to understand how much their company might be worth.

I proposed these scenarios to help explain:

Scenario 1
Consider Company A and Company B which are both in the exact same industry.

Company A
$10,000,000 in sales
$1,000,000 in net income
The founder is an industry all star who is the rainmaker and can regularly make calls to his contacts and bring in new business.

Company B
$10,000,000 in sales
$1,000,000 in net income
The founder is talented and is assisted by two general managers who were trained by the founder and follow a process of systematically finding and closing on new business.

Which one would you pay more to buy? A or B?

Scenario 2
Consider Company A and Company B which are both in the exact same industry.

Which one would you pay more to buy? A or B?

These scenarios really helped get the point across.  It became clear that the value of a business involved more than just the business' cash flow. The riskiness of that cash flow is also an enormous factor in determining how much to pay for a company.

In Scenario 1, while Company A is run by an industry all star, a buyer will struggle to create value in an organization which revolves around a person who may no longer be there after a change in ownership.  In Scenario 2, while Company A may have a nationally recognized client, the departure of that client would be a disaster, therefore also rendering this Company's cash flow at a higher risk.

This phenomena is picked up in the Cost of Equity Formula that many may be familiar with as part of the Capital Asset Pricing Model (CAPM). A modified formula which often works well for private companies (the company's correlation with the market is not accounted for, Beta is assumed to be 1, and a variable is added in for riskiness of the specific company) is below:

Current values for each of these variables can found from sources like the Duff & Phelps Valuation Handbook.  The Company Specific Risk Premium, however, is a measure of unsystematic risk and thus must be measured by examining the individual company being valued.  Here is where much of the "art" of valuation comes in. And because CSR can be as low as 2% or as high as 40%, this variable alone can overshadow the numerous other valuation variables that can be deduced by more scientific methods.

And there are many other scenarios than the two listed earlier in this post.  A buyer would be wise to spend a lot of time carefully understanding Company Specific Risk before arriving at a target's value and moving forward with an investment.  A seller would be wise to identify and mitigate Company Specific Risk in order to increase valuation before attempting to go to market.

Special thanks to Ken Sanginario of Corporate Value Metrics who was instrumental in my ability to articulate the importance of  Company Specific Risk in prepping a company for sale.

June 01, 2018
When I review financial performance with managers of middle-market private companies I find, with few exceptions, that their focus is almost exclusively on their income statements. “It’s all about profit,” they say. “It’s all about the bottom line.” In practice many chase revenue, even unprofitable revenue, but most understand that profit is necessary and that increasing it is a good thing. It turns out, however, that it isn’t all about profit. Profit is very important, but there’s more to it than that. And some of the pieces of the puzzle can be found on the balance sheet. Here's one example I often run through with businesses I work with: Suppose we have Company A and Company B, both in the same industry and making similar products. They each have $10 million in revenue and $1 million in profit. Company A creates its profit with $10 million in assets (machinery, accounts receivable, inventory, etc), while company B creates the same profit with only $5 million in assets. Whic
Read more 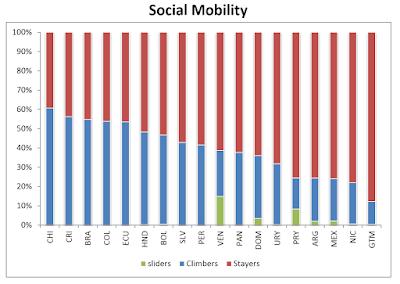 In the Economics courses I teach each semester, before we dive into the mechanics of supply and demand and after we establish what the science of economics is, we discuss the various types of economic systems around the world.   We spend at least a couple of classes discussing the economies of the world on a spectrum between those that are command and those that are market economies.   One source we use to feed our discussions is the Index of Economic Freedom , which ranks the economies of the world. About five years ago many of my students assumed that the United States was at or near the very top of the list.   They were wrong (as I had also been before diving deeper into the facts).   The United States left the index's highest “Free” category in 2010 and has been in the lower “Mostly Free” category ever since.   ( Interestingly, as an anecdote of how public perception has changed, today most of my students come to class expecting that the United States is not at the top of
Read more